Timing is everything.  During October, reviewer Angie Mangino is giving away her print reviewer’s copy of Painted Black in a contest on Facebook.  Then today, I received notice that Gary Stout posted a review of Painted Black on Amazon.  A five-star review, no less!  So after you read HIS five-star review, go to Angie’s Facebook page to read HER -five star review, and then comment in her post to possibly win your very own print version of the book.

Here’s What Gary had to say:

Borys has written a story from the streets of Chicago. She has developed consistent characters, used excellent imagery, and captured a glimpse of youth viewpoint of life on the streets and lost innocence. It’s easy to get behind the plot and want to follow along as the characters find themselves caught up in the struggle to survive amidst the horror of greed-at-any-cost entrepreneurs that see the street youth only as pawns in their diabolical schemes. The thrilling climax will leave you breathless. Three cheers Ms. Borys.

And here’s Angie’s explanation of her contest rules: 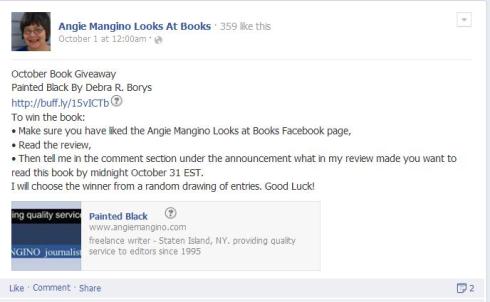 Book of the Month Finalist!

Painted Black is one of the picks for the Reader’s Choice awards at TBR Books! YOU can help me win! I’ve never been lucky, so I’m counting on all my friends and family to lend me some of their luck—-and votes! Cast your vote at  The To Be Read Pile – Home.