I remember walking by this place. 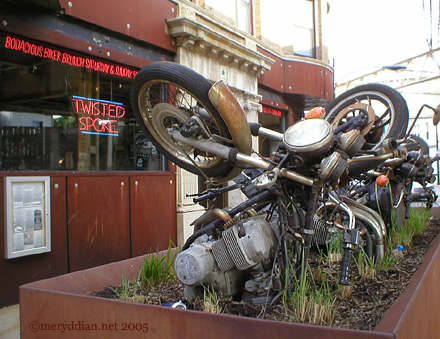 Atta Boston! Be that team. And Chicago, any town with a bar like Twisted Spoke should be able to fight off Ohio. I mean, come on. #PornNEggs

This street artist is not someone I knew, or ever will know.  Because he was murdered in 2008.  I found out about his death when a blog I follow on chicagonow.com posted a note that his murderer had recently been found guilty.

But he’s someone I could have known.  He graduated from the Illinois Institute of Art, where I used to work.  I could easily have walked past his art on my way from the Blue Line to Union station on one of my visits home to see family.

So even though I didn’t know him, I wanted to mention his art and his passing here.  Because really, he’s not that much different from a lot of the kids I did know on the Chicago streets.  Not a lot different from any of us.

Street artists get to show their stuff legally tonight at the A.Okay Loves CTA (Chicago Train Art) show. About 50 urban artists use O-scale model trains for their tagging pleasure in the show at A Okay Official from 6 to 10 pm Friday (tonight) at 3270 N. Clark St.

One of the featured artists is Solve, who caused a stir this week on the Blue Line when he did an installation piece on seat near the Hobo Corner.

He stenciled the words “We are experiencing legal difficulties” on a TV, plugged it into the secret outlet, and sent it on its merry way into the morning CTA rush hour. 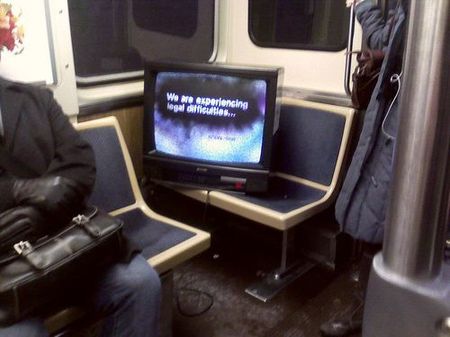 I got a nice 4-star review on Amazon.com and Goodreads.  Judith compares the book to Willard Motley’s Knock On Any Door.  Pretty cool!

Jo Sullivan helps a homeless boy, Chris, look for his missing girlfriend, carrying us deep into the Chicago’s underbelly where street kids struggle to survive. Their quest carries them deep into the macabre, where the homeless are fed into the sick ambitions of the rich. The stories of neglect and abuse that people her world are as real as the mystery of Lexie’s disappearance, and in the end, Borys creates not only a page turning mystery, but an authentic and moving picture of a bitter, harsh and cruel world, reminiscent, for me, of Willard Motley’s 1947 Chicago epic, Knock On Any Door, a story that moved me greatly back in the Fifties.

–Judith Kirsch, author of  The Inheritors

What do you see when you think of teens living on the streets of a city? Do you get angry, compassionate, or think it’s a shame, but not your problem? Be ready to see these teens in a different way.

In this novel, Borys introduces readers to Jo Sullivan, a reporter who started out just looking for a story, but who finds so much more. Most especially, she finds Chris Young, a young graffiti artist living on the streets, surviving however he can. Together they look for the truth, not only about a funeral home, but also about themselves.

“Midnight interviews at funeral parlors – not exactly the way they mapped thing out in Journalism 405: Strategic Communication Research. But then nothing about Jo’s situation now related to what life had been back then.”

Jo comes to care about Chris, as do readers, with Borys painting a picture of life on the streets of Chicago that will absorb and involve readers as the reality shocks and captures them.