Beautiful examples of street art in this interview below.  If the photographs in the book are anything like these, it might be worth buying a copy.

Debuting his book “Chicago Street Art” for the first time at the opening, Mr. Dupre is very excited to see the show come to fruition after nearly a year of planning. Brooklyn Street Art asked him about the Chicago scene today and his new book and he gives us some insights here. We also had an opportunity to shoot some art on the streets of Chicago last month –

via “Chicago Street Art” Debuts with an Exhibition and a Book : Brooklyn Street Art.

Street lights washed out the blink of green neon from the Hotel Chateau. Most of the windows had drapes drawn closed; half of them hung crooked on their rods. Near the entrance stood a young woman, hands in the pockets of a short jacket with the collar turned up. When the girl noticed them, she hurried around the corner.

“Lexie,” Keisha called and headed after her. Jo followed. “Alexis, I know it’s you. Quit trying to get away.” To Jo, she added, “She’s just a kid.”

When the girl turned and waited with a sullen expression, Jo saw what Keisha meant. Despite the reek of perfume, thick layers of eye shadow, and mascara that turned her lashes into tarantula legs, she could not have been older than fifteen.

I don’t get it.  How do people develop such hard hearts?  When I hear people saying things like “Why don’t they get a job?” I can at least put that down to stupidity.  Especially during a time when people WITH homes and easy access to showers and clean clothes and alarm clocks are having a hard time finding jobs.  People who say get a job just plain aren’t thinking.

But then there are people like the guy who posted the comment below, found in an article on how the heat wave is affecting the homeless.  Let him die?  Let him die?  Who raised this person?  What happened to him in his life to make him so dismissive of another human life, a life he knows nothing about?

He makes me want to write a short story.  The plot of the story is this guy in danger for his life somewhere.  Drowning, maybe.  Fallen off the edge of a L platform with a train rushing toward him.  Then a hand reaches out, pulls him to safety.  The hero walks away without waiting for a word of appreciation.  It isn’t till later it is discovered the person who saved him was the homeless guy he calls a worthless individual.  The sad thing is I’m not sure what the ending is.  Will this guy change his tune and start to look at people differently?  Or is his heart too hard to ever open his eyes?  What do you think?

I am sick of these bleeding heart stories. As a taxpayer, I resent that my taxes are being used to fund “services” for these losers. If he doesn’t like the climate, why does he stay here? He has been homeless for his entire adult life…let him die. He is a worthless individual who will continue to expect the rest of us to support him for the rest of his life.

via Heat Wave Especially Hard On The Homeless « CBS Chicago. 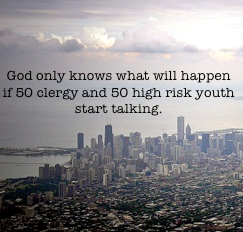 I found a great blog on chicagonow.com called Third Coast/Third World which “embraces global human rights & recognizing Chicago community activists.”  I think you can expect to see a lot of links to them in the future here.  I really appreciate the author’s reality based yet hopeful view of the way things really are.

“Long before Chicago children ever become victims of gangs, drugs, poverty or violence they find themselves the unwitting victims of our assumptions. Those assumptions matter because they are the very tools necessary to dismiss a good kid as a potential problem, or a not so good kid as an unrepentant sociopath. When do they ever get to speak their hearts about what’s going on in the communities around them? What would a corpse in a child-sized coffin, or a pre-pubescent mugshot say if they could speak before they met their ends?”